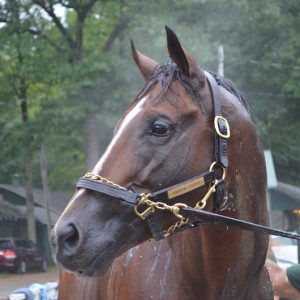 The partnership had been hoping the son of Lion Heart would bounce back from a torn suspensory sustained when he stumbled during the Priority One Jets Forego Stakes (gr. I) Aug. 29 and get a second shot in the Breeders’ Cup World Championships at Keeneland.

“He didn’t bounce back as quickly as we’d hoped, and the horse has been so good to us, we decided to retire him,” said Jamie Hill, a partner in McMahon & Hill Bloodstock and a co-owner of Bourbon Courage. “He was such a tough horse and so versatile, we think he deserves a chance as a stallion.”