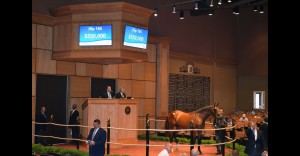 The first endeavor Mike and Jamie ever undertook was a weanling to yearling pinhook that ran a few years in the late 90’s known as the “Small Hope Bay LLC”, named after a popular but quiet resort in the Bahamas.   The partners purchased 3-5 foals per year and sold several decent horses at a profit.

Foal pinhooking began in earnest when the McMahon’s purchased 60 acre Spruce Lane Farm in 2005.   The first big success was a Bernardini filly purchased for $205,000 who resold for $725,000 and was named Listen Dear.  Eleven stakes winners or stakes placed horses have followed the including current Graded Stakes horses Co Cola, Ferocious and Southern Honey.

The best may be yet to come.  In 2013 the Spruce Lane Pinhook partnership was fully extended at $145,000 to purchase a mature colt by Cowboy Cal.  The colt was a “10 physical” for many but his sire lacked in popularity.  His dam appeared to be on the right track.  McMahon & Hill liked the colt because his one year older brother had made a striking impression on the team at the yearling sales the year before.   After buying the Cowboy Cal colt, the older brother took off and won the G2 Rebel Stakes at Oaklawn Park.  His name is Hoppertunity, one of the top ten three year olds in the United States of 2014.

The Spruce Lane Pinhook capitalized on the timely update and resold the Cowboy Cal colt for $550,000!